Kick in the Pants

Een paar goede quotes uit een technologie artikel in de gezaghebbende New York Times vandaag over Bing vs. Google:
“Microsoft, knocked around for so long as a bumbling laggard, has given the innovative upstart Google a kick in the pants”

“Google, meanwhile, has quietly introduced its own new features that have in several instances looked a lot like Bing’s.”

“Google is watching Microsoft closely, mimicking some of Bing’s innovations — like its travel search engine, its ability to tie more tools to social networking sites and its image search.”

“Google has even taken on some of Bing’s distinctive look, like giving people the option of a Bing-like colorful background, and the placement of navigation tools on the left-hand side of the page.”

“Google has also played catch-up to Microsoft in offering ways to search for and digest more images in one go, and has trailed in adding some tie-ins to social networking sites.”

“Google seems to do things because Bing has done something,” Mr. Sullivan said.

“I was a Google user before, but the more I used Bing the more I liked it,” Mr. Callan said.

“Bing’s share has been growing, as has Yahoo’s, while Google’s has been shrinking.” 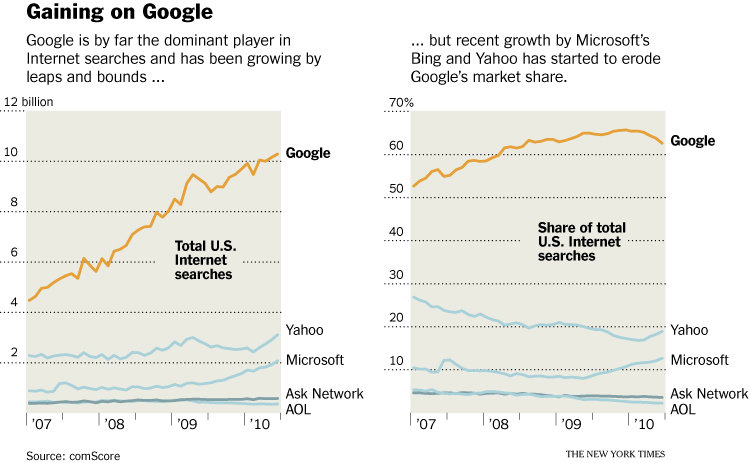